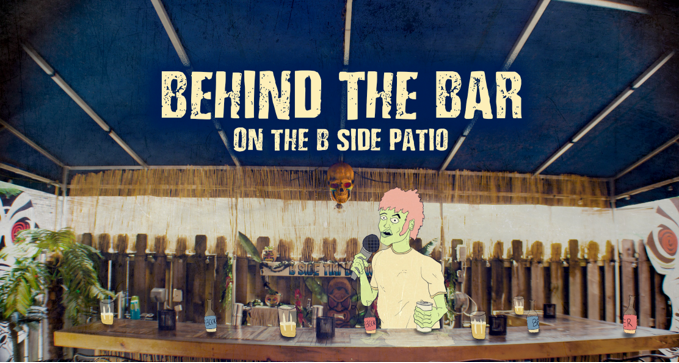 Grog Shop & B Side Lounge present Behind the Bar at B Side Patio concert series!

--By The Grog Shop

With the deafening silence and halt of live music, we have decided to curate a few socially distanced patio events featuring some of Cleveland's best. Please join us as we try to keep the music going.

If the weather does not cooperate, we will move the show inside. We are selling tickets on both the Grog Shop and B side websites and are offering groups of 2-6 people to ensure safe distancing.
All patrons must wear masks upon entry and throughout the club, unless actively eating or drinking. Once you are seated at your table, you may kick back and relax, but moving around the club, in any capacity, will require your mask - and yes, that means over your nose and mouth.

While seating is very limited, group seating is available to accommodate groups of 2, 4 and 6. Please reserve and confirm your seating request asap. If you find you are unable to attend, please email us at Grogkat@gmail.com so we can accommodate more guests.

There are many great food options on Coventry - feel free to grab a taco from Cilantro Taqueria, a sandwich from Tommy's, pho from Pho & Rice, sushi from Pacific East or any of the other amazing places in Coventry Village!
B Side is committed to keeping a fun, but SAFE environment for our customers and staff!
Thank you for your continued support during these strange times.

Enjoy the Music on the Patio!

Tha Writas Block Series is back on the B Side Patio! We are teaming up with Blush Boutique to present a fun pop up shop, as well, for this one!  So, drink, shop, and listen to great music! Liz Kelly is the front woman of Cleveland psych pop band, The Village Bicycle. She performs fun, upbeat songs about the abject horror of modern life, cognitive dissonance, and outer space.
Feel free to grab some food to bring in for the event. There are tons of great restaurants on the street and Greek Festival is hosting a drive through event, right around the corner!

Ray Flanagan can be found rocking and rolling with his band The Authorities, or playing sideman to any number of bands and artists. But this time, he’ll be delivering his own songs intimately in a dynamic solo performance in a unique setting behind the bar on the B Side patio.

A special patio performance featuring John Ramsey and Bill Derivan from Orange Animal uniquely positioned behind the bar on the B Side Patio. If the weather dos not cooperate, the show will be moved inside. Cleveland rock band Orange Animal has one statement it wants to be heard loud and clear on its music:  “Sing loud the love you cannot say.” The band blends pure Rock and Roll with bits of folk and blues into their unique sound.

Maura Rogers and The Bellows are an Americana band rooted in rock, folk, and blues. Female fronted with powerful musicianship and emotional vocals, MR&B will move your body and soul. The music history of founding band members, Maura Rogers and Meredith Pangrace, began with a life-saving kidney transplant in 2012, and the evolution of their musical collaboration is both compelling and inspiring. Selling out Cleveland’s top venues, they continue to captivate audiences with their powerful live performances. At the root of music is the capacity to move others, and the band achieves it with honesty and fervor.‍

heyohwell is the shimmering indie/electro pop project of Hallie Grace.

Brian Straw has been a fixture on the Cleveland music scene for over 20 years. He has played in many bands including  is now owner of the Survival Kit Gallery and plays really pretty and somewhat sad songs.

John Kalman self describes his style as folk, soul, singer-songwriter, acoustic, country, fractured-pop, all in a blender. He plays sad bastard songs served up with a smile.  He is also a long time Grog Shop employee and loved by all.

Brent Kirby is a night's stroll with a rock n' roll romantic. This does not mean Kirby's merely a smitten troubadour, or a bard for the wayward but colorful life of musicians. Though his own songs bring up those immortal topics, Kirby's romanticism is much bigger than that. His songs start with the introspective stir of strum and voice, but just like his performances, quickly move outward and embrace the listener.

When David Smeltz founded I-Tal in 1978, the first Cleveland reggae band outside the Jamaican community, he launched a scene whose impact is still felt to this day. He is often called the Godfather of Cleveland Reggae.

We have a CD release finally on the B Side patio with  Bobby Vaughn (formerly The Promise Hero) Bobby has been pumping out pop-rock / indie music his whole life and is excited to release something that truly embodies himself on his debut self-titled EP. More details at www.bobbyvaughn.net

Please visit www.bsideliquourlounge.com for a full listing of events!

Thank you for your continued support!

-The Grog Shop & B Side Staff