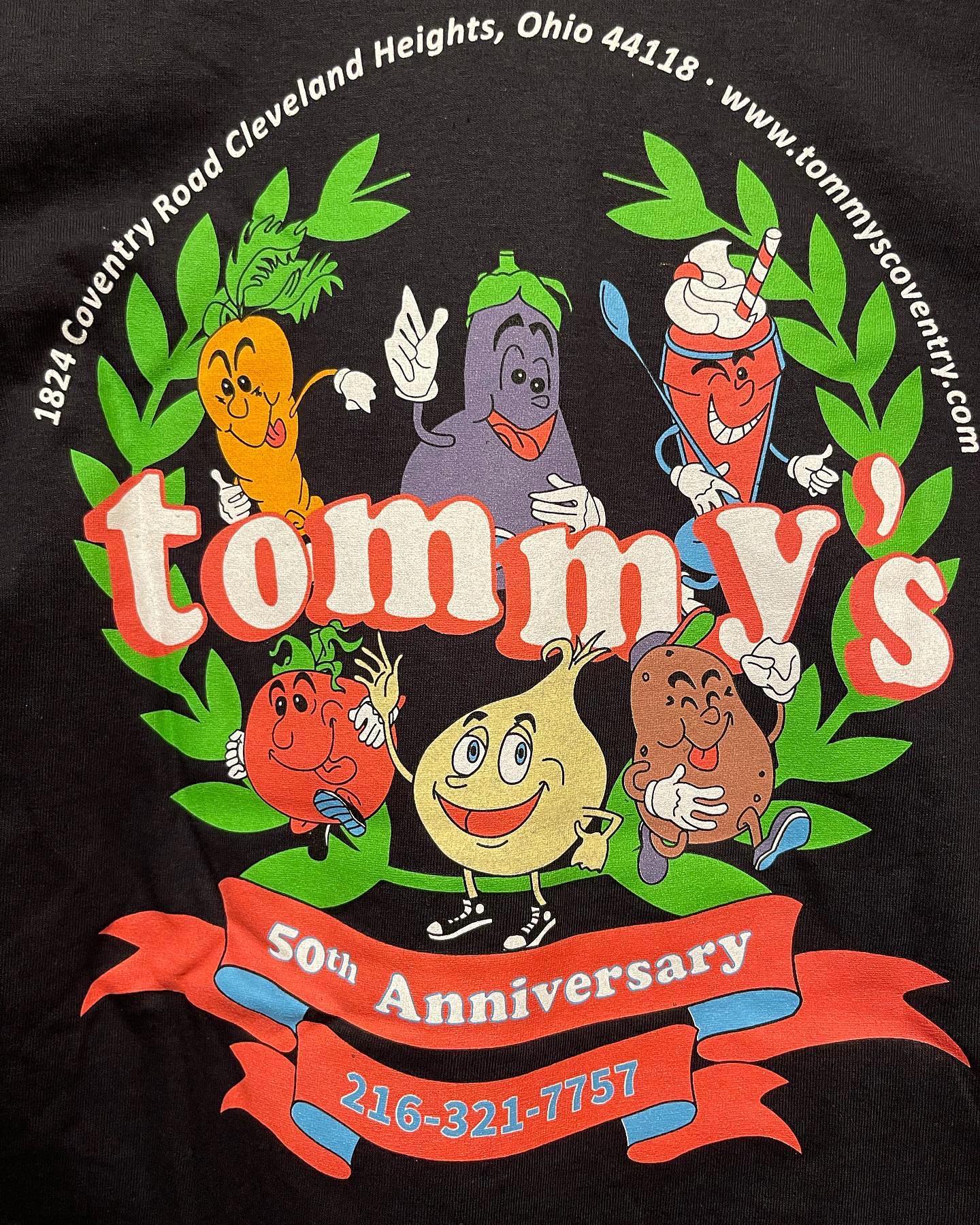 Tommy is celebrating his 50th Anniversary this week and this year. He has nourished our bodies and souls with delicious food and good will since 1972--from raising funds for Heights Arts in an annual New Year's Day pancake breakfast to very quietly donating food to many, many groups and organizations.

Some of Tommy's story has been reported widely---how he took over a drugstore soda fountain when he was 19 years old and began serving Middle-Eastern dishes. And how he moved several times under various circumstances until he occupied the spot Tommy's is in now.

What isn't so well know is his role keeping Coventry in good repair. He does this through the Coventry Special Improvement District in concert with the city. It adds hours to his work day---if the sidewalk snow plow needs a part, he's on it. If a truck crashes into a light pole, he contacts and follows up with insurance companies. If the sprinkler system for the flowers springs a leak, he's the guy to call. In big and small ways Tommy keeps us healthy and whole.

Tommy is the most honest person I know. Straightforward, down to earth and humble. He is the heart of us and Tommy, his family and staff deserves to be celebrated every day.

Here's what some other neighbors had to say!

"Friends...There are few people on this Earth that I admire more than Tommy. His namesake restaurant is celebrating it's 50 Year Anniversary. Tommy's Restaurant, who has survived 3 fires, a recession, and a pandemic.I can go on and on about what Tommy has meant to Coventry, to Cleveland Heights, and beyond. Tommy's is truly a Family Restaurant and his Family is so special! I got to believe that no other local business has given teenagers their first job more than Tommy's has. Not only teaching them work skills, but more importantly, how to socially interact with the public, in all types of situations. Nobody and I mean nobody, has given more to our community than them. Amazingly, Tommy does so much without asking for anything in return. Tommy's children and now grandchildren, who have or are presently working at Tommy's, continue that wonderful business/community positive outlook philosophy.
Tommy is the King of Coventry! WE LOVE TOMMY'S!!"

"As a city planner, I recognize the value of “placemaking” in strengthening and energizing a neighborhood.

In the Coventry Village neighborhood, Tommy’s restaurant has been that “place” for the past 50 years, with Tommy still behind the counter.  Amazing!

When I eat at Tommy’s, I am always happy to see how this restaurant continues to attract baby boomers and ex-hippies who were Tommy’s customers in the 70’s, along with their children and grandchildren and an ever-renewing group of new high school and college students.

‍"Tommy and his restaurant embody the spirit of our community, with a diverse menu that serves everyone; a bright, fun space with a welcoming atmosphere; and a generous spirit that supports great causes, including the Library's Centennial Celebration in 2016. Tommy donated refreshments to help us celebrate, and took the event to a higher, delicious level. Heights Libraries loves Tommy's!"

"I’ve known Tommy since 1975.  And while he never deigned to name a sandwich after me, I still like him.  Scratch that.  I adore him.  Tommy is truly the heart and soul of both Coventry Village and Cleveland Heights.  The only thing I will never understand is why everyone who works at Tommy’s seem to never age.  The young kids who host, bus, serve and make the shakes today look exactly like the kids from 45 years ago.  Tommy either figured out a way to keep them from aging (which means never having a labor shortage) or he’s found a hereto unknown supply of young people that he can cycle-in as the others cycle-out, with some going on to fame and fortune.  Either way, the formula works.  Keep on truckin’, Tommy."

"I am a die hard Tommy's fan..I have been going there since it opened.  So many memories there. Still love going. The milkshakes were my dad's absolute favorite thing in the world. My dad passed away 6 years ago. We always celebrate him by coming to Tommy's on his birthday and Father's day. Cheers! Thank you for always making the best food and milkshakes!"

Share your favorite memory of Tommy here by emailing your testimonial to CoventryVillageStaff@gmail.com